It has been predicted that the US market will see a huge growth in license plate recognition, which is projected to reach $3.57 billion by 2023.

Machine learning and Image processing play an important role in LPR system. With the help of computer vision, vehicle images can be used to detect license plates and their characters. Machine learning creates a way for the system to automatically learn and improve the accuracy, thereby delivering better results.

So, what are the applications of License plate recognition technology?

Vehicle license plate recognition is widely used in traffic management and monitoring. For example, some cities in China are using this technology to enable drivers to pay parking fees with an electronic wallet, without leaving their cars. This system has received a favorable reception due to its convenience.

How does a License Plate Recognition system work?

License plate recognition has actually been practiced since the 1970s. Its earliest implementation has been with law enforcement where cameras attached with police cars or on streets identified license plates of passing vehicles and matched the results with the database.

The three main stages of a LPR System

Character segmentation: In this stage characters on the license plate are mapped and segmented into individual images.

Character recognition: In the final stage, machine learning helps to identify every individual character that was mapped and segmented earlier.

Even though a license plate recognition system can be built without using machine learning, using AI & machine learning to develop an LPR system is definitely more advantageous. This is because machine learning improves the accuracy and effectiveness of the system, due to an improved training process.

Skyl.ai computer vision model automates the process of license plate recognition. Here we provide an overview of how custom models can be trained using Skyl.ai, starting with data collection and ending with testing the model’s performance.

License plate detection is probably one of the most used cases of computer vision. It is very easy for a machine to detect a license plate since they are very distinct and easy to spot. But to do this we have to first train a machine to understand license plates. How this is done is by feeding hundreds of license plate samples to the machine and then training the model. The license plate region is checked to verify the correct plate. After that the license plate image is located by the model, the output is sent to an OCR (Optical Character Recognition) system, and it reads the characters and gives out the result.

Skyl.ai machine learning platform is a great tool for creating License plate recognition models. To build this model we have scraped 200 images from a public data set.

Data can be labeled in two ways - it can be a form-based method or on the mobile app. The model uses the bounding box method of labeling data.

The data labeling page overview consists of the label categories, the number of records labeled, and outliers in the data. The page also shows the progress of different collaborators in the labeling process.

The next step is creating feature sets or subsets of the dataset for model training. The random split that we have used for the feature set is 80:20. It is also possible to customize aspects such as extracting data or letting the platform manipulate ratios of training and testing.  Using featureset is important as using the entire dataset will not be useful for creating accurate models.

After creating feature sets you can move onto training the model. At this stage, you can select your feature set you want to use to train the model. You may also make notes in the model description. In this model, Skyl uses Faster RCNN (Transfer Learning with Resnet-50). Faster R-CNN passes the entire image to a Convolutional Neural Network, a class of deep neural networks, which generates regions of interest. It then extracts features from these regions, classifies them into different classes, and returns the location of the area of interest..

Computer Vision is a growing field with data scientists finding new ways to create impactful visualizations. Visit Skyl.ai to learn more about how to create other computer vision & NLP projects. 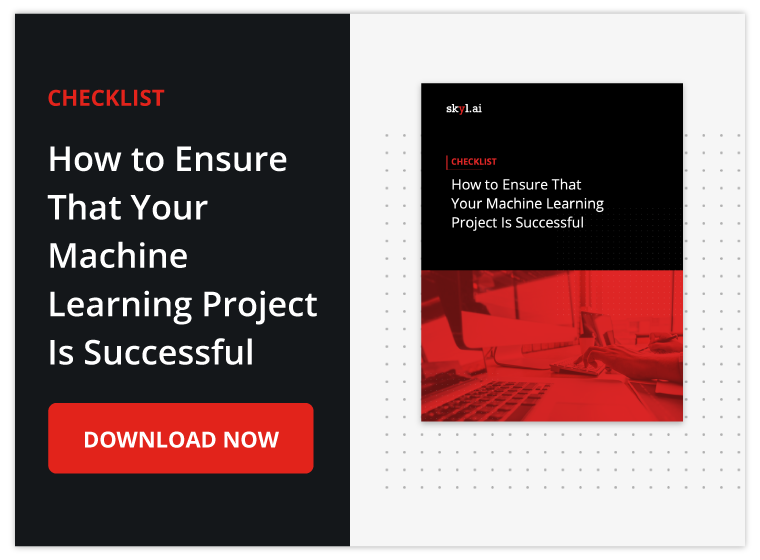